How to Prepare Your Child for Fall Daylight Saving Time

In my experience as a Parent Coach, many of my clients express concern about the dreaded time change that happens twice a year: DAYLIGHT SAVING TIME!

Recently, I've had the privilege of collaborating with an amazing Child Sleep Consultant, Lauren Peacock of Little Sleep Stars. I compiled a list of questions in the hope that it would help make this transition a little easier for my followers as well as myself!

How can I prepare my child(ren) for the time change?

How you approach the clock-change depends on your little one’s age, temperament and flexibility. There are a few different ways to manage the adjustment, some of which involve more preparation than others – read on for my top tips…

How can I prepare myself for the time change?

It is a great idea to get an early night on the evening of the clock-change as there is no guarantee that you won’t have an earlier start by the new time than you would like! Psychologically, that’s easier to tolerate if you didn’t go to bed late in reliance on the extra hour. It will also alleviate some stress if you can avoid any time-critical arrangements on the first “new time” day as this will give you some buffer if your little one doesn’t adjust immediately.

How far in advance should I start making adjustments to my child(ren)’s schedule?

This really depends on your child’s age and adaptability. An incremental approach is usually best for babies and younger children and/or those who have generally fixed sleep and wake times.

Parents should commence this plan on the Wednesday night immediately prior to the clock change, putting their child to bed 15 minutes later than usual – so 7pm would become 7:15pm. There should be scope for a little one to sleep for 15 minutes past their standard wake time on the Thursday morning. Whilst this may not automatically happen, if it does and can be accommodated, the plan is off to a flying start.

If at all possible, parents should adjust meal and nap-times on the Thursday so that they also sit 15 minutes later than usual.

On the Thursday night, bedtime should be pushed back by another 15 minutes – so to 7:30pm from an original starting point of 7pm. As before, parents should factor in that their little one may sleep a little later on the Friday morning.

Again, meal and nap times should be moved in line with the “new” (albeit very temporary!) daily schedule on the Friday if at all possible.

The process of adjusting times by a further 15 minutes should be continued, meaning that on the night of the clock change, the little one goes down at 8pm but only 15 minutes later than the previous evening.

Managing the one-hour change in these smaller steps means there is less scope for a child to become overtired. It also enables their body-clock to adjust. A 60-minute time difference split over three or four days is manageable for almost all children.

For less sensitive sleepers and older children for whom overtiredness isn’t so much of a risk, parents may find it works well to just push bedtime back on the Saturday night by as close to an hour as the child can manage. A child who still naps in the day can be given a helping hand by their nap on the Saturday afternoon being nudged back slightly to better balance the awake time in the morning and afternoon. However, for a little one who is young enough to still nap (some daytime sleep is typically helpful until around 3 years old), a full hour is a long time and pushing a child too far into the red of tiredness is likely to have a horrible unintended consequence – they will get up even earlier than usual the following day!

As counter-intuitive as it sounds, a child who goes to sleep too late is likely to wake super-early. This is due to a hormone called cortisol, which they will have secreted in order to stay awake. Cortisol is released naturally by the body to wake us for the day, with levels gradually starting to rise from around 3am. Whilst this would typically build sufficiently to rouse a little one between 6 and 7am, a pre-existing level of cortisol means the process kicks in too hard, too early, leading to a child who is wide-awake at 5-something (or the “new” 4-something!).

The final option is to essentially split the difference and stretch a little one to a bedtime on the Saturday night that is 30 minutes later than usual. As before, in order to reach that later bedtime whilst avoiding the dreaded “second-wind” of overtiredness, Saturday’s nap(s) can also be nudged back by 15 minutes. This means the extra half hour of awake time will be split evenly across the morning and afternoon.

As a little one won’t have made it all the way to 8pm with this approach, parents should expect a wake-up that is a little early by the new clock time on the Sunday morning. However, this will iron itself out pretty quickly over the course of the following few days. Young children, unable to tell the time, are driven by what time of day it feels like, so if parents maintain meal-times consistent with the “new” time, little ones will soon adapt.

Is it better to make the adjustment to the sleep schedule all at once or gradually?

As outlined above, for babies and younger children a phased approach over a number of days usually makes for a smoother transition. Children aged from around 3 and a half, particularly those who gave up their nap some months before, will be physically more able to hold out to a later bedtime on the Saturday night without becoming so tired that it then undermines their ability to sleep well. Every parent knows their own child best however and there will always be those little ones who suit a different approach to that typical for their age.

Does my child’s age play a role in how I adjust their sleep schedule?

The older a child is, typically, the longer period of awake time they will be able to manage before becoming exhausted and then overtired. Whilst age is a huge factor in determining a child’s comfortable “wakeful window” it is worth noting that there are always exceptions. In my experience children who are particularly bright or alert, and those who are either sensory-seeking or avoidant, often need more sleep than is typical for their age and so an older child who fits this category may manage best with an incremental approach whereas an especially easy-going two-year old may sail through an extra hour to bed without descending into an overtired meltdown.

What are some simple tips to make this transition easier on the whole family?

Parents should try to bear in mind that whatever happens on the Sunday morning, children will always adapt, and if the parents forge ahead with family life according to the correct time, a little one’s body-clock will soon catch up. A helpful aspect of the clock-change when it comes to child sleep is the darker evenings. Melatonin, the hormone which makes us feel sleepy and helps us to stay asleep, is secreted by the body in low levels of light – which is why we typically find it much easier to sleep in a dark environment. However, as the evenings darken, the mornings will, for a short time at least, be a little lighter. If this daylight is creeping into a child’s room, it is likely to drive them towards wakefulness. With this in mind, blackout blinds or curtains can be one of the best purchases a parent ever makes!

Do you have any tips to add? Any questions about the tips above? If so, please comment!

You can find even more in depth sleep tips from Lauren HERE!

You can find our video series on Sleep & Parenting HERE! 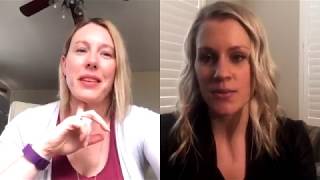 Community Interview with Your Aussie Agent

5 Books For the Adventure of Potty Training

Children's Books: How to keep your child engaged while reading

Turning Around A Tough Day: 2 questions to make you and your child's day better

What’s Really Behind Most Power Struggles?

My TOP 5 Parenting Books for Parents of Young Children

Why Our Best Efforts as Parents Sometimes Fail, and How to Power Through.

Teaching Children the Art of Contentment

How to let go of perfectionism as a parent

What to do when Your Child Leaves you Speechless...

7 Proven Ways to Support Your Child's Mental Health at Home

Raising a Happier Child: The Power of Choices